I've got a little list… No, not that little list. After all, Gilbert and Sullivan had their Lord High Executioner name the Lady Novelist among those who'd surely not be missed. No, my little list is one you might actually want to be on, thanks to the friends and readers who told me what they like most about authors' email newsletters. (I've got one more question about that, but we'll come back to it.)

I promise it won't clutter your email in-box. The people already on my list can attest that I've, um, never actually sent anything with it yet. That's because I've been holding out for the moment when I could offer something I heard mentioned again and again in your lists of favorite things: exclusive content. Spun-off short stories, deleted scenes, alternate versions of kept scenes, all these were things people had enjoyed from other authors' newsletters, or as thank-you freebies for people who joined email lists.

So, to make my little list bigger, I'll be offering a spin-off short story about Stisele, the heroine of The Imlen Brat. For at least the next three years, this story will be available only to my list subscribers.

(Why three years? At that point, it will probably be part of a novel.)

"The Enemy in Snowmelt Season" finds Stisele in her late teens, serving in a war zone as her foster father's envoy. She has a mission to complete, but a snowmelt flood throws her into the company of an enemy soldier and traps them both atop an ancient ruin. Who will be whose prisoner? Whose side will find them first – her weathercalling kin, or the unstable prophets who command his Augury? That’s assuming she and her meddlesome ghost companions can keep her alive through the night.

Thanks to my patient spouse, this 9,000 word story is formatted for Kindle, ePub, and Mobi. It's not quite a work of design like The Imlen Brat will be when it comes back from Design for Writers, but Kate Baylay's lovely colophon gave us something to put on the cover. Here it is in the royal red of the Principality of Beltresa, the commoners' leaping dolphin emblem under a heavy crown of seven tines: 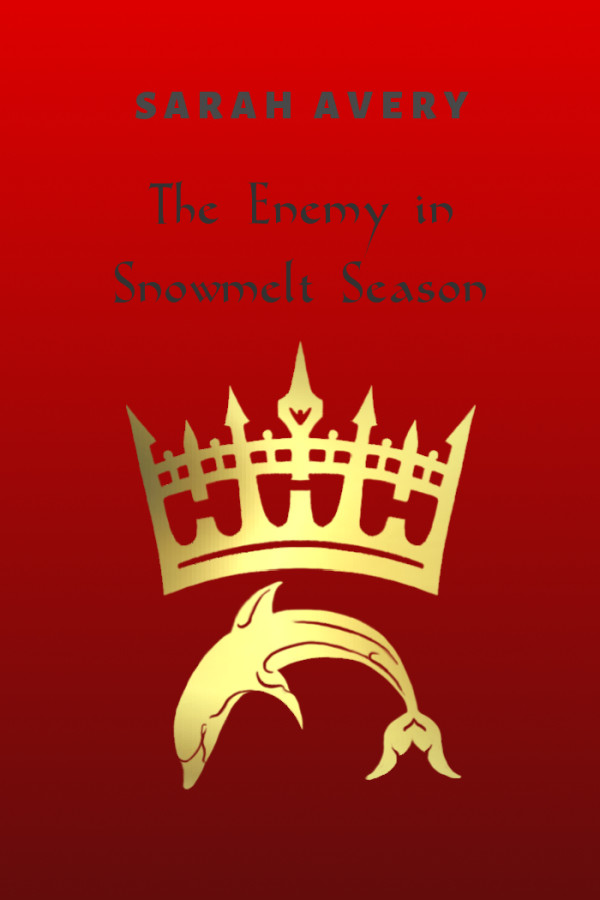 After laboring over that a while, Dan said, "Now, to get the cover image to show up on people's Kindles, you need to give it an ISBN of its own. One for each format, actually."

"If we're going to do this, we should do it right." Dan knows me well.

As my grandfather used to say, anything worth soldering is worth soldering to NASA specifications. So now I've got a batch of ISBNs. I was going to need some anyway for The Imlen Brat. It's good to be one item further down the Kickstarter checklist.

The one thing we're still figuring out is the best way to get these ebooks out to people. Dan has come across several different ways to do this, but we're guessing there's probably a way readers prefer. So I put the question to you guys, especially if you've received free ebook files from other authors' sites: which way of getting those files have you liked best?